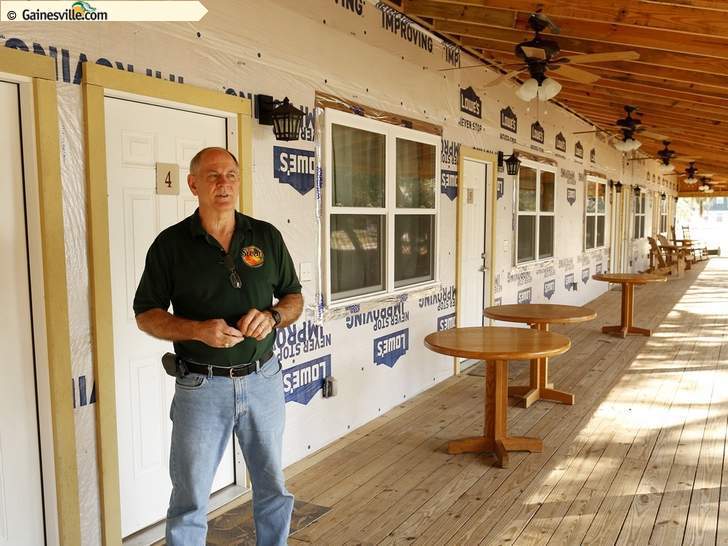 Melrose Fla. – For Perry Rollins, Lake Swan Camp near Melrose stirs memories that span the course of his life. He first visited the camp when he was 12 years old, and as a teen it was at Lake Swan that he met his wife, Toni — to whom he’s been married for 43 years. He remembers helping out at the camp as a college student before eventually being hired. “That was like a dream come true to come here and serve,” he said. Rollins, now 63, and his wife moved away for a while but began working at the camp again in 2011. It is a special place not just for them but also for their eldest son and his wife, who met there just as they did decades ago.

The Christian-based camp, which is located on State Road 26 east of Melrose, was established in 1927 by John Minder, a mentor to iconic evangelist Billy Graham. Graham used to work at Lake Swan Camp when he was a student at the Florida Bible Institute in Temple Terrace, said Rollins, who is now the camp director. Graham used to do odd jobs that ranged from dishwashing to lifeguarding.
​Rollins is overseeing renovations at Lake Swan Camp that are the first of several upgrades planned for the camp. He and his wife are helping develop a 100-year plan for the camp that doesn’t aim to make the camp bigger as much as it aims to enhance what’s already there, he said. Renovations to a building at the camp that is a former Army hospital transported years ago from Camp Blanding are nearly done, as is a new 140-foot waterslide that empties into Lake Rosa. The camp is situated between Lake Rosa and Lake Swan.

The building has been used as dormitory space for a while and was last remodeled in the 1960s. Seventy-five percent of the work on the most recent renovation was done by volunteers under the guidance of licensed supervisors, and the camp raised $190,000 to help fund the project. Through the camp’s Adopt-a-Room Program, people who donated $5,000 could name a room after a loved one. Rollins wants to use the Adopt-a-Room fundraiser for future projects as well. The camp broke ground on the building renovation in February 2012 and he hopes it will be complete by the start of the new year.

Thanks to its newest remodeling, the ex-Army hospital includes a mix of motel-style rooms and dorm rooms as well as a conference room with kitchen space that visitors can use. A newly added porch offers what he calls the camp’s “million-dollar view.” The waterline of Lake Rosa isn’t far off, so people can sit out there and enjoy the view of the lake. The porch has inspired plans for remodeling the camp’s other facilities to take advantage of the beautiful lakeside view.

Lake Swan Camp is a place where people of all ages can get away from the busyness of everyday life and connect with each other and with God in a more serene setting, Rollins said. Rollins said he has had group after group tell him that coming to the camp was like entering a different world. “I have seen literally hundreds and thousands of kids who have come here and met God in a special way,” he said.

While commonly used by Christian groups, the camp welcomes other organizations as well. Summer is its busiest season, and overnight stays are its bread-and-butter. Visitors can take part in activities ranging from archery and basketball to tubing and water-skiing. “Obviously, the lake is our main forte,” Rollins said. “That is the heart and soul of the camp in terms of our recreation.”

Jeff West, pastor of missions and evangelism at The Family Church in Gainesville, said the church has hosted its winter men’s retreat at the camp for the past couple of years and plans to do so again next January. West had a great time playing on the camp’s human foosball court at a past retreat, and bonfires became another fun way to socialize. It’s too cold to do water sports on the lake in January, but some men brought their fishing gear to make the most of the camp’s lakeside location.

The staff and facilities are top-notch, West said, and its location is ideal. “We want something that’s far enough away where we can really have a retreat, but we didn’t want it so far away that it would be prohibitive for people to travel and get there with their busy work schedules,” he said.

CRU, a Christian student organization at the University of Florida, hosts its Fall Getaway retreat at the camp every year. Adam Ridenour, a 21-year-old accounting major who is the president of CRU, has gone to the event every year since coming to UF.

Coming to Lake Swan Camp is a good chance for new students to get away from day-to-day dorm life and make friends they’ll keep throughout college. “It’s just a great time in a smaller setting to get away from just the business of college life and to just experience God in a new way out there,” he said.